“I hope they don’t see this. I have to go back there next week.”

The apocalypse seemed nigh earlier this month, when Kim Kardashian said that she might actually take her husband Kanye West’s (misogynistic) advice and move on from dressing seᶍy. Kardashian seems to know her decision wasn’t taken lightly: “I saw this whole thing where it’s like, ‘She’s so demure, and she’s covered.’ And I was like, ‘Guys, I had a shearling coat on and a turtleneck because it’s, like, freezing,’” she said in a new interview with New York magazine. 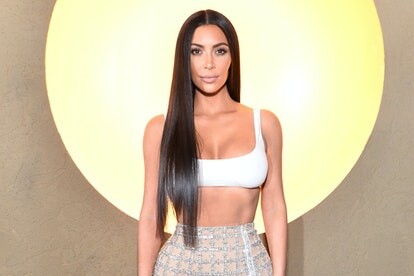 But Kardashian also admitted that yes, the process of dialing it down a bit has already begun. “I don’t know if it’s the fact that my husband has voiced that sometimes too seᶍy is just overkill and he’s not comfortable with that. I listen to him and understand him. Still, at the end of the day, he always gives me the freedom to be and do what I want,” she said. “But I have kind of had this awakening myself. I realized I could not even scroll through Instagram in front of my kids without full nudity coming up on my feed pretty much all the time. And I definitely contributed to that. I mean, one of my most iconic covers was the Paper magazine one, when I was all oiled up and ripping my dress off.”

Kardashian’s husband and kids aren’t the only ones who’ve inspired such a dramatic lifestyle change. Her decision was also influenced by, of all people, Donald Trump. “I also did think, like, Okay, I’m here in the White House and then the next day I was posting, like, a crazy bikini selfie,” she continued. “And I was thinking, I hope they don’t see this. I have to go back there next week.” (And she has indeed returned to Pennsylvania Avenue, atoning for her wardrobe sins by covering up in Vetements.)

As for the fact that she even finds herself in such situations—and that she apparently has real political influence in America—Kardashian claimed that she, like the rest of the world, is baffled: “I’m just as surprised as everyone else.” She credits her pivot to criminal justice reform (and law school) with a more general shift in attitude that came after she was robbed at gunpoint in 2016, but also agreed with the idea that becoming the mother of four children who are African American provided some motivation to work for change. “I do believe that race does play a huge role in the criminal-justice system, if you look at all the numbers,” she said. “Statistically, one in three black men will be locked up in their lifetime. So that does weigh heavy on my heart.”

So far, Kardashian’s rebrand has made a significant change in the lives of more than 30 people who’ve been unfairly incarcerated. And she seemed to promise that a change is in store for her millions of Instagram followers, too. “I don’t care to take the time out of my day on vacation like I used to, where I’d pull up to the house and I’d see, This is a setup, this is an Instagram pic. Now this is a different setup. Oh, this place has so many different setups. This is going to be amazing,” she said. “I guess I just don’t care as much anymore to want to take tons of photos in a thong bikini. I actually just want to lay out.”